The following breakdown is written in conjunction with our Transfer Livestock Subsidies to Native Animal & Habitat Restoration Projects Petition.

More Than $30 billion Per Year:

The U.S. Department of Agriculture (USDA) spends more than $25 billion annually on subsidies for farm businesses, with  most of these agricultural subsidies going to farmers of wheat, corn, soybeans, rice, & cotton.  Roughly a million farmers and landowners receive federal subsidies, but the payments are heavily tilted toward the largest producers. [1]

According to the Cato Institute, upwards of $30 billion taxpayer dollars per year are funneled into cash subsides to farmers and owners of farmland each year.  Seventy-two percent goes to the ten largest subsidized farms, effectively countering the original New Deal intention of supporting small family farmers. 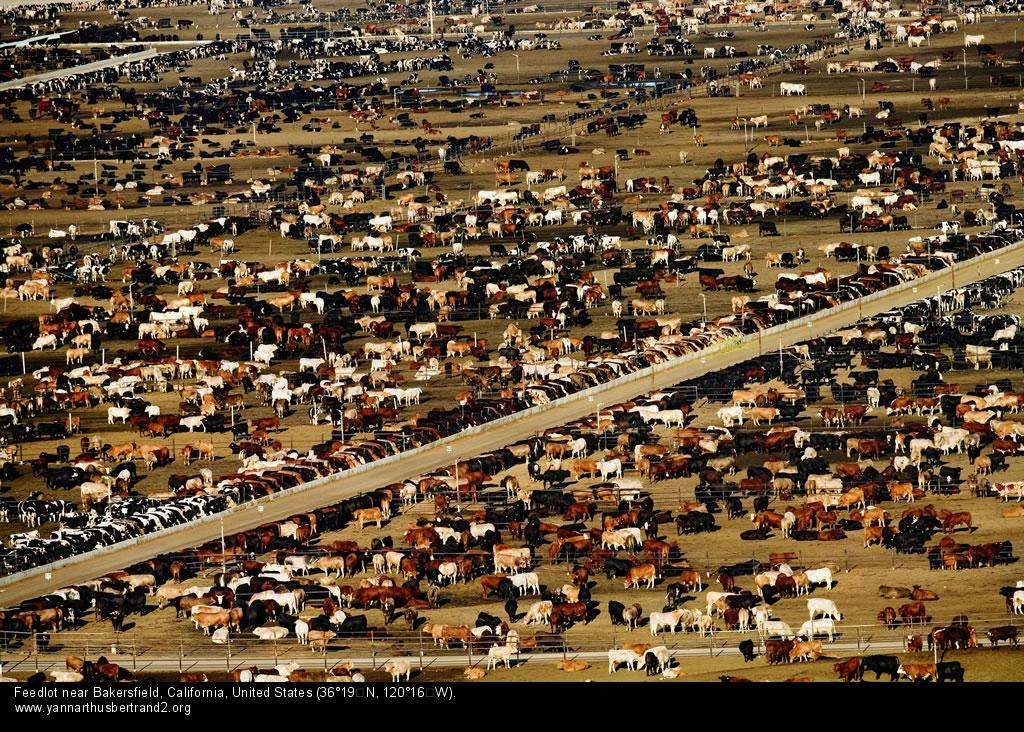 Above photo of a Bakersfield, CA area feedlot posted by KüreLee.  Feedlots such as this are typical throughout the U.S.

Note: The Conservation Reserve Program & similar conservation programs which collectively cost ~5 billion per year are not included, as they pay farmers to keep their lands out of production.

1.) Insurance – Crop insurance run by the USDA’s Risk Management Agency is the largest farm program with annual outlays of about $8 billion. [3] Subsidized insurance protects against various business risks- adverse weather, low production, & low revenues.  It covers more than 100 crops including feed crops for livestock – corn, cotton, soybeans, & wheat are the main ones.  It subsidizes both insurance premiums and administrative costs of the 19 private insurance companies that offer policies to farmers. [4]

2. Agricultural Risk Coverage (ARC) – This program pays subsidies to farmers if their revenue per acre (or county’s revenue per acre) falls below a guaranteed level.  Generally, the lower are prices & revenues, the larger the subsidies paid.  More than 20 crops are covered, from wheat and corn to chickpeas and mustard. ARC subsidies fluctuate, but were around $7 billion in 2016.

4. Marketing Loans – This is a price guarantee program that began in the New Deal era.  The original idea was to give farmers a loan at harvest time so that they could hold their crops to sell at a higher price later on.  But the program has evolved into just another subsidy program that delivers higher payments to farmers when market prices are low.  These subsidies will cost about $400 million in 2016.

7. Research and Other Support – Most American industries fund their own research and development, but the government employs thousands of scientists and other experts to aid the agriculture industry.  The USDA spends about $3 billion a year on agriculture and food research at more than 100 locations.  The department also provides other support services, such as statistical information and economic studies. [1]

Back to The Platform: