The California Lichen Society was established as a nonprofit corporation in 1994, & has grown from the original 9 founding members- including Mr. “Bill” Hill- to now include over 200 members worldwide.  “CALS” is an active group, & has set the goals of mapping the state’s lichen flora, preserving its endangered species, AND enhancing the knowledge & understanding of lichens throughout California & adjacent areas. 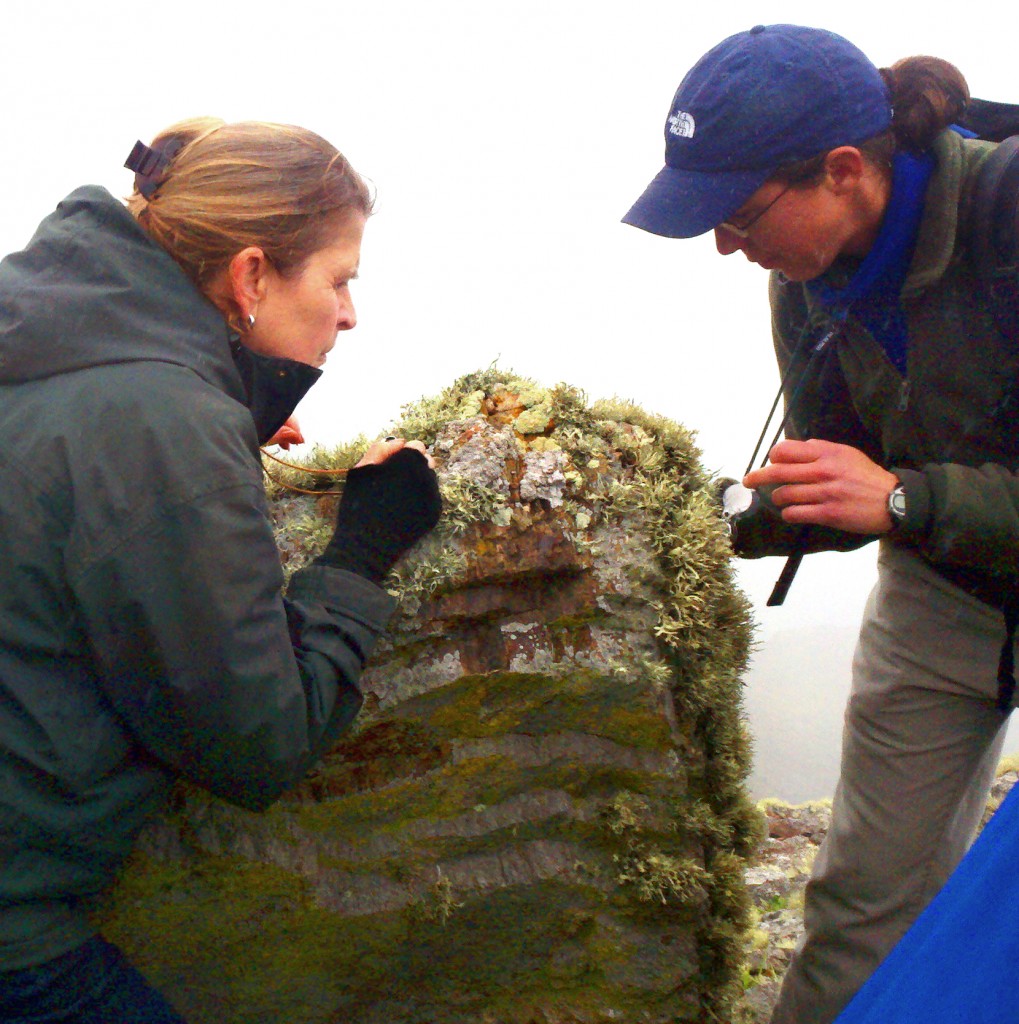 Above:  California Lichen Society members Kathy Faircloth & Shelley Benson examine coastal Niebla ceruchoides– or “Fog Lichens”- during a foray on the coast of Marin County.  By the way, hover over the words Niebla ceruchoides.

Wild Willpower’s founder, Distance Everheart, documents regularly at CALS workshops- & has been learning alongside one of the founders, Bill Hill since 2010.  She volunteered 3 years at the Bay Area Mycological Society’s Annual “Fungus Fair“ with CALS, & documented hundreds of mushrooms that were on display & already identified AND labelled to-the-species by its members.  She began organizing them into the “Identify a Species” section of WildLivingSkills.org (which is far from complete), and she plans to volunteer AND study with with The California Lichen Society and attend many more Fungus Fairs in the future. 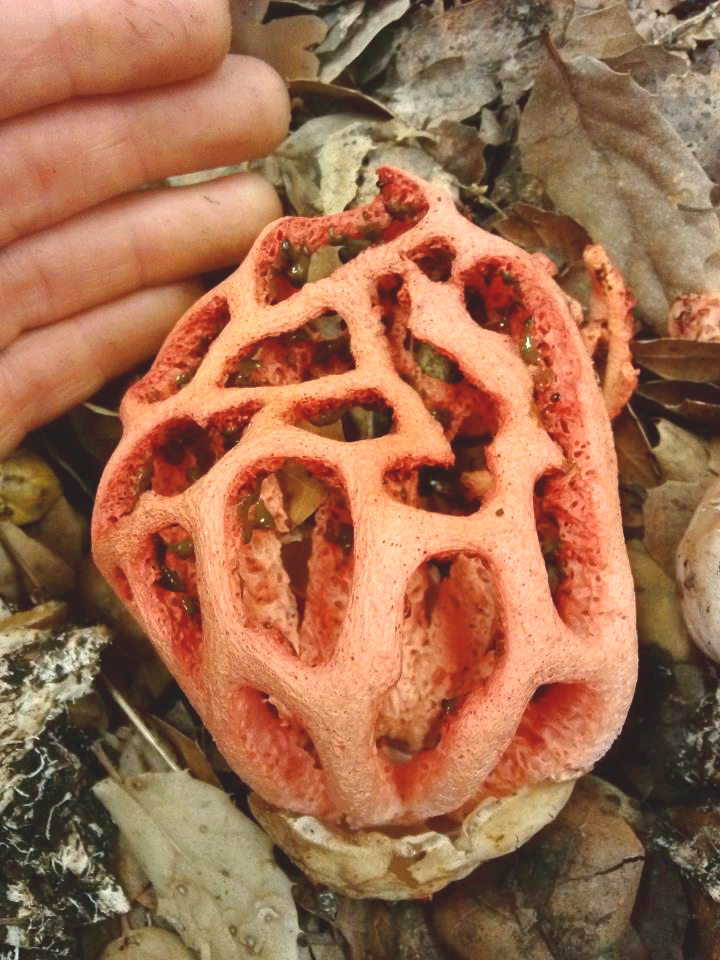 Above:  The Clathrus ruber is a highly-poisonous stinkhorn mushroom; this was just one specimen on display at one of the Fungus Fair events.  There are thousands of different species of mushrooms just in California- many edible & many poisonous- & many with uses as dyes or traditional & emerging medicines. Many edible species have poisonous look-a-likes!

Before coming in contact with CALS or Bill, Distance had already been documenting alongside former U.S. Armed Forces Wilderness Survival Instructor & Native American Wild Skills Expert Richard Lonewolf, AND Blade Knapping Expert Gary Pickett for years, & after meeting Bill, she hitchhiked back & forth between northern & southern California in order to document & organize everything she’d been learning under one “roof”; The Wild Living Skills Database & Smartphone App — being developed on WildLivingSkills.org.   This “Database & App” is slated become the first set of GPS, time-of-year, & elevation-responsive dichotomous keys for lichens, plants, mushrooms, OR trees EVER- which will reduce species identification from ~20 questions (using books) down to only about 5!  These keys will ALSO include rollover-&-view glossary terms with pictures- making this piece of technology a quantum leap in scientific advance for humanity.  Before unveiling *the progress* that has been made now after 4 years, here is a single page from Common Rocky Mountain Lichens, by Larry L. St. Clair — just to look back at “the old keys” & remember what it was like back when we had to flip to the back of the book EVERY TIME we came across a glossary term! (click to be able to zoom in): 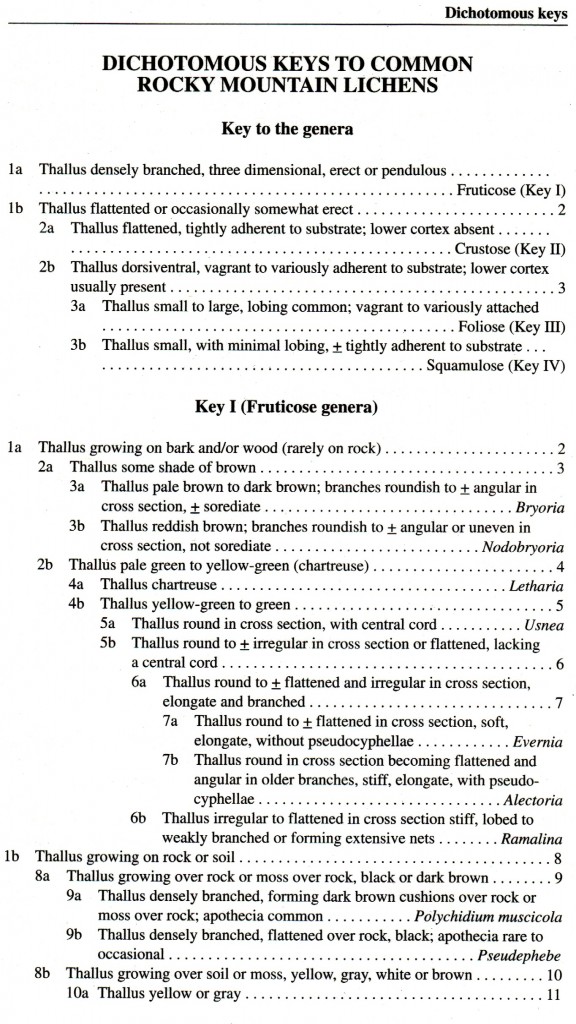 As you can see, dichotomous keys usng books makes species identification tedious, difficult, & a time-honored art;  pages like the one above can go on for 20 pages just to identify a single specimen!  (THEN its time to *double-check*!)  There also must be at least one expert in the room to explain things which pictureless pages make too vague for beginners to grasp.  Underneath the photo below you will see some more *rollover-&-view glossary terms with pictures* (there were some above in case you missed them!).  When you hover over the magenta glossary terms, if the explanation bubble appears partially off the page, scroll the page until the glossary term is in the middle of the page- then hover again. 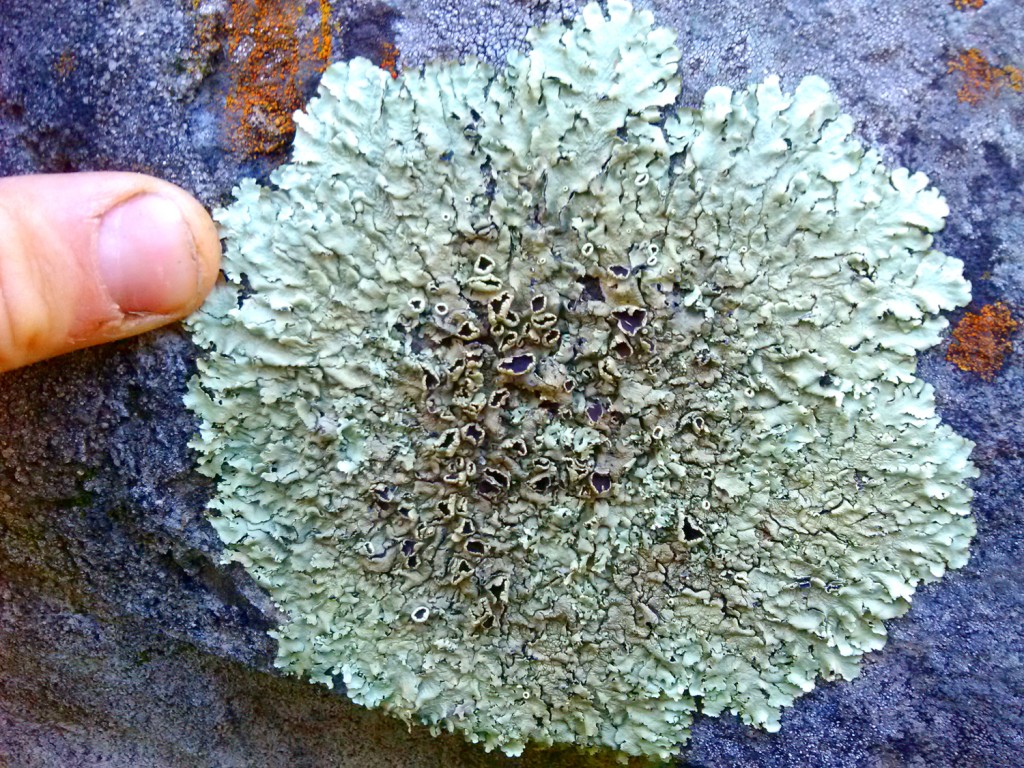 Above:  Xanthoparmelia cumberlandia is a “foliose” lichen.  Lichens of the Xanthoparmelia genus grow on rocks, & are yellowish-green (“xantho” means “yellow” in Latin), & the species “cumberlandia” is characterized by the presence of apothecia protruding from the thallus AND by the botanical region it grows in.

The use of lichens by humans dates back to the earliest of civilizations.  However, due to ecological depletion & extreme sensitivity to air pollutants, harvesting lichens is strongly discouraged;  small amounts should ONLY be harvested IF there is a great abundance of that species in the area, AND only as needed.  Otherwise- please be good to the forest & *don’t harvest anything*- let it continue growing. 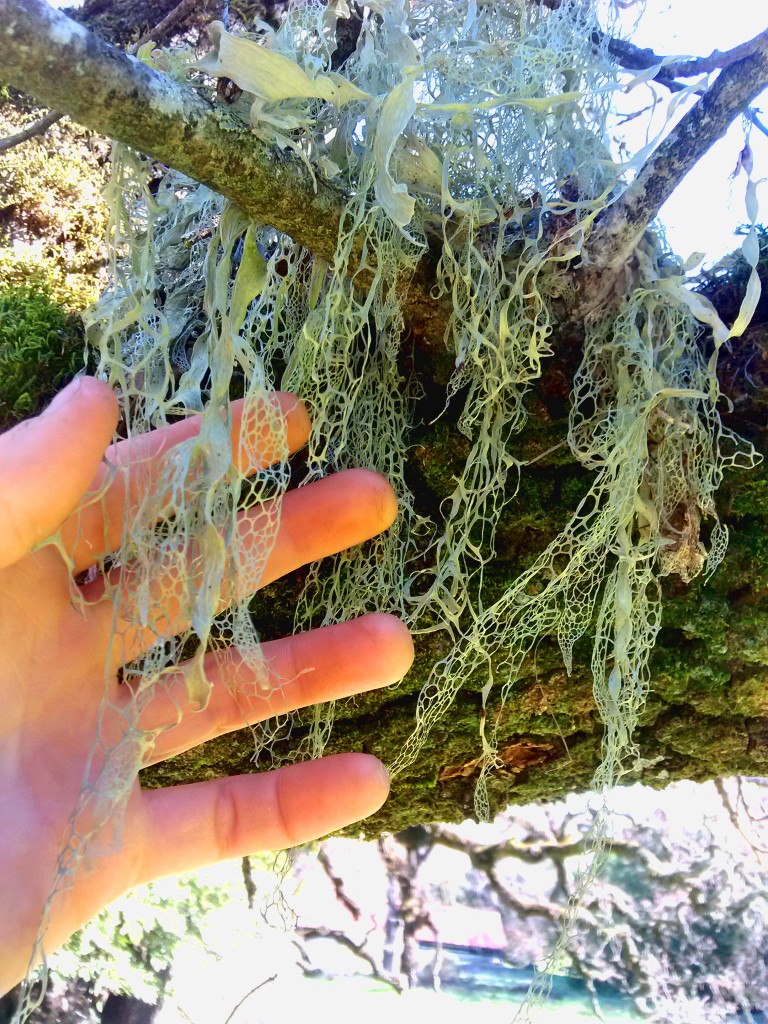 Above:  Ramalina menziesii– also known as “the lace lichen”-has been used for thousands of years by more than one California Native people. The Kawaiisu Nation has traditionally used this species for its metaphysical properties; it is said that by placing the lichen in water, rain will come, & by throwing it in fire, thunder & lightning will not come.  (Sharnoff 2003).  People of The Kashaya Pomo nation have used it as a fiber- specifically “for baby diapers & other sanitary uses of that nature”. (Sharnoff 2003).

Bill has combined a lifetime of learning with collecting a unique & vast library on slough of topics among what has now become The Institute for Social & Technological Alternatives, & his aid to & teaching Distance– including extensive education & providing a safe place to be & get work done while being also provided countless meals & “rescues” of all sorts, helped make Wild Willpower what it is becoming today. 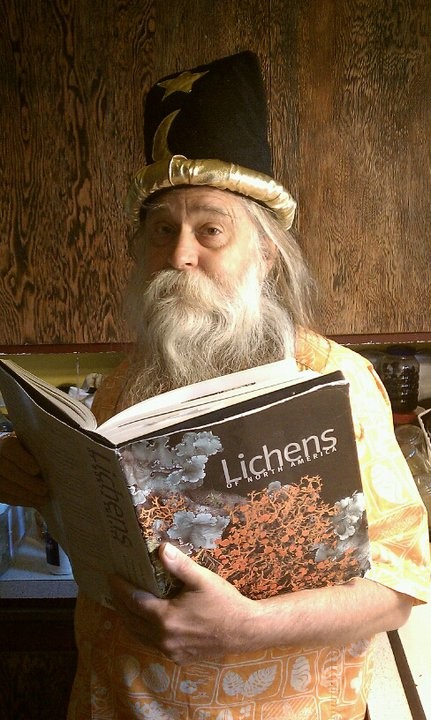 Above:  Bill “The Lichen Wizard” Hill holds Lichens of North America by Brodo & Sharnoff– a go-to book for ALL lichen wizards.

“I would like to extend a very humble thank you to Bill, TICOR, & everyone at The ISTA for helping to make my life possible; its a great honor to be continuing PART of your amazing, passionate life’s mission.  I would also really love to thank everyone at The California Lichen Society workshops for all the helpful education & inspiration.  You have not only been a wonderful teacher, but also one of my closest friends; you saved my life & are a grandfather to me.  I look forward to working out the kinks, & soon upgrading the website to help bring this all to life.“