Transgender Iowan, arrested for going in the women’s restroom in 2006, still seeks justice (2022)

I will get to the restroom story very soon, however it is directly related to another injustice which happened earlier that year, and additional injustices which happened subsequently – all involving some of the same parties in Ames, Iowa.

After you read through the following, you will see:

Part One – “The License Discrepancy”:

Before I was arrested for trespassing for going into the women’s restroom on July 21, 2006, I was arrested earlier that year – on May 22 – by Officer Blake Marshall because my California ID did not match up with the State of Iowa’s records. The State of California recognized my gender as female and my name as “Alexandra” based on a court decision which took into account medical evaluations and the doctor’s regimen I was adhering to. The State of Iowa, however – where I’m originally from – still had me recorded as a male named Alexander.  Officials involved should have taken into consideration the fact that I am transgender and was undergoing medical treatment.  Although I told them this fact, Officer Marshall arrested me and wrote into his police report  that I was a male, omitting this highly-relevant information and instead writing a series of false statements with regard to my conduct.

I know I was arrested for this reason because when his partner, Officer Nathan Rivera, drove me to the jail in Nevada, IA, he told me that they never arrest people for playing music – that they were just going to ask me to leave.  He said that his partner decided to arrest me after he saw my records didn’t match up.

When I was being booked inside the Nevada (Iowa) jail, a woman jailer told me, “You need to do something about this.”  She accused Officer Marshall of “being a jerk” to anyone with an “alternative lifestyle”.  She also told me he was the women’s hockey coach.

The following morning, from jail, I plead NOT GUILTY and my trial was set for June 7 then rescheduled to July 21.  Although in the docket I signed my name as “Alexander”, this was because that was the only record the state was acknowledging.  I felt intimidated because of how I was being treated.

Before I went into the courtroom at the District Courthouse in Ames, IA to face the above trial, I went to the restroom located just across the hall. While exiting, again Officer Marshall arrested me: this time for “trespassing into the women’s restroom”.  Although I’d been using the women’s restroom for years without issue, Officer Marshall and Judge Steven Van Marel ordered Officer Marshall to arrest me.  I was not aware of Judge Van Marel’s involvement in this incident until November 2022.  Judge Van Marel and Officer Marshall only referred to my Iowa records while willfully ignoring and omitting my California records, statements, and medical condition within their filings with the state.  For example, here is what was written for this the incident report: 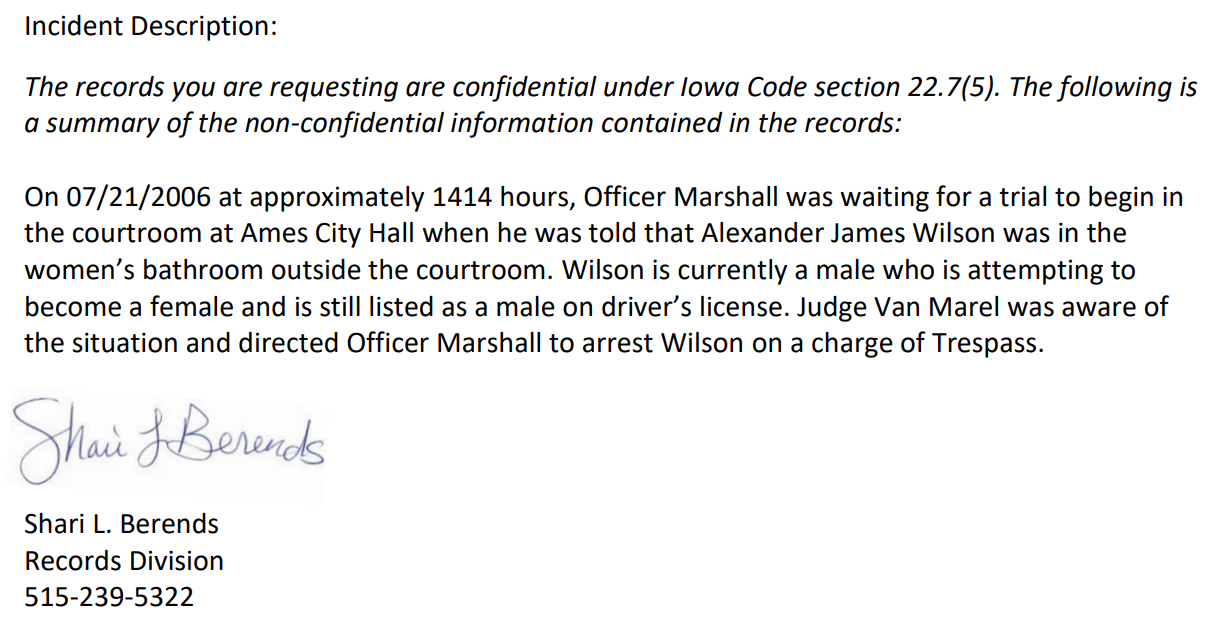 I really didn’t know anything about the legal system back in 2006 because they didn’t teach anything about it in high school.  I felt scared, intimidated, and not looked out for or cared for by these elders because of the way they treated me.  I had no clue how to handle this legal predicament myself. Additionally, I had lost support from the vast majority of my friends and family after deciding to seek medical treatment to transition.  I was in a vulnerable position (and still am) at that time in my life.

The state ought to have honored the Full Faith and Credit Clause of the Constitution instead of doubling down on old, outdated records.  Officials should have used common sense and actually listened to me when I told them I was transgender – they should have included it in their filings. They should have been compassionate in their discretion; instead they abused their power and bullied me.

When I called my family from jail to tell them I was arrested for going into the women’s restroom. My dad, concerned for my situation, connected me with an attorney an attorney, Gordon Allen, who came and met me.

Mr. Allen told me that I could not sue the City of Ames because this type of case was unprecedented, but the City of Ames did agree to issue me a public letter of apology and $1500.  He said that if this type of issue ever happened in the future, this letter would help set a precedent: the next person would be able to sue.  He asked if this was agreeable, and I said yes.  Here is a copy of the letter and the check:

Apology letter from the City of Ames (Iowa)

Check from City of Ames

It would not be until years later – in 2022 – that I discovered Mr. Allen changed all three of my “not guilty” pleas to “guilty” without my knowledge or consent.  I’ll get back to that issue below.

Soon afterward, I hitchhiked to Iowa’s state capitol to find a Representative to speak with. To me – the letter of apology was not enough: I wanted legislation passed to protect transgender people in the future.

The congress member who came to meet me was Beth Wessel-Kroeschell. We both remember the conversation well because Beth told me it was peculiar that I would show up on this particular day because on the following day she was scheduled to present to Congress to propose adding gender identity and sexual orientation to the list of protected classes within the Iowa Civil Rights Act!  What were the odds of me showing up one day beforehand?!

I gave her a copy of the apology letter, and soon after watched on the news that the State of Iowa became the ninth state to explicitly protect transgender people against discrimination.  Thank you, Beth!!

Sixteen years have passed since I was arrested for the license discrepancy and for “trespassing” into the restroom. Since that time, I have always thought of my experience as a “win” until recently.  On November 3, 2022 – following a separate injustice involving local nonprofit Reliable Street – I ordered a copy of the docket for every injustice I’ve experienced here in Ames in hopes to get the records for this series of injustices set straight.

It was then – after looking what was written in the docket – that I learned Mr. Allen changed all my pleas for the above cases from “NOT GUILTY” to “GUILTY” as part of a plea agreement I was not informed about (which I never would have consented to).  I was under the impression that the City of Ames issued the apology letter and check to me because they realized I was treated unfairly. Now – more than a decade later – I have learned that the State of Iowa has absolutely no record I was wronged!  I asked Mr. Allen for a copy of any documentation I may have signed wherein I consented to changing my pleas, however he said there are none.  Although he told me that I verbally consented, I absolutely would not have: I would not have agreed to pleading guilty to being “a man who trespassed into the women’s restroom”.  Why would I agree to that??  Here is a copy of the docket for this case where you can see that I plead “not guilty”, however my three not guilty pleas for all the above cases were changed to “guilty” by Mr. Allen.

While I do sincerely appreciate Mr. Allen helping to arrange the apology letter and preventing me from spending additional time in jail for crimes I had been falsely accused of, acknowledgement that the State was at fault should have been entered into the state record.  I need to get these charges stricken from my record.

Iowa has no records of the apology letter:

I performed a records request with Story County and the City of Ames.  The State of Iowa has no records of the apology letter or the check that was issued, nor do they have any record regarding contents of the “plea agreement” Mr. Allen referenced in his filings.  The state has it incorrectly recorded that I was a male trespassing into the women’s restroom.  Although this does fit many peoples’ political narrative, it is extremely offensive and is a major reason transgender women are so often mistreated in society today.  I have contacted the City of Ames as well.  They, too, have no records related to the apology letter or check. It is as if they were just scraps of paper given to me to get me to walk away happy while allowing the State of Iowa to maintain an anti-transgender political position.  Here are copies of the records requests:

Records Request to City of Ames

Notice: Although the emails from these two local governments include disclaimers warning me that the messages are confidential – I do not consent.  I am exercising my  First Amendment right to record public officials, and to disseminate such material.

It was not until after reading the docket (on Nov. 4 this year) that I discovered Judge Steven Van Marel ordered Officer Marshall to arrest me for “trespassing” into the restroom. This is very disturbing, because he judged a separate case three years later – in 2009 – wherein he unjustly charged me with “assault” even though evidence indicated the truth: that I did not touch the accuser!  Even the accuser’s own witness stated that he saw the entire thing and that I didn’t touch her, but Judge Van Marel ruled against me regardless.  Now that I have learned how he was involved in me being arrested years earlier, I believe he ought to have recused himself from that case.  Instead I have this assault charge on my record which should never have been put there.  To me this shows hard evidence that the two City of Ames employees who warned me I “may be in danger” from “other local officials” who were “upset” about the restroom issue – told the truth.  Read about this case, as well as a second related case, here:

Following an unjust ruling, officer warns Ames resident to “leave the state” for her safety (2009)

Some people have said these instances “happened too long ago”, however the discovery rule and the doctrine of equitable tolling extend limitations periods in cases wherein the fraud was not discovered until after the victim discovered the evidence.

I am a victim of color of law crimes, malicious prosecutions, and fraud, and I am willing and wanting to testify to everything written above.  I also possess additional evidence for all these cases.

The fact that I was warned by more than one City of Ames official that my life may be in danger, and was literally homeless for more than a decade (includes a great deal of suffering) as a result of these injustices, needs to be accounted for.  I’m not sure how else to do this other than make the information public and try to find legal representation (state or federal attorney – please help).  I believe there are grounds to sue the State of Iowa for the following:

If you are interested in representing me in court, or if you would like to donate to help with legal fees, please email [email protected] and write JUSTICE in the subject line.

Thank you for caring enough to read all this!

Back to Home Page