Hague v. Congress of Industrial Organizations (1939)  found that “requiring citizens to obtain a permit in order to be able to perform First Amendment activity violates the due process clause of the Fourteenth Amendment.”    The City of Ames, however, requires petitioners who use a table to file for a temporary obstruction permit.

Why This is a  Problem:

When I asked City Attorney

Deputy Clerk says Petitioners must file for Temporary Obstruction Permit (TOP) in order to set up a table:

Tuesday, Aug. 7 - I visited with Deputy Clerk Heidi Petersen regarding my  intent to set up a table alongside the sidewalk (outside the library, and in other locations) in order to hand out campaign materials, gather petition signatures, converse with citizens, and raise funds for Wild Willpower's national plan.

Deputy Petersen informed me that “petitioning with a clipboard is fine,” however if I planned to set up a table, I would first need to apply for a Temporary Obstruction Permit,  then have it approved.   Deputy Petersen added that proof of commercial general liability insurance will need to be shown to the city prior to having the permit approved.   I informed Deputy Petersen that "because I'm performing noncommercial First Amendment activity, I should not have to purchase commercial insurance."  Deputy Petersen responded, "Regardless — you will still need to  buy commercial insurance."   I then requested to see the ordinance which mandated the permit and insurance.  After finding the ordinance, Deputy Petersen informed me that "It looks like there is a waiver process for the insurance that I was not aware of."  She then printed  a copy of Sec. 22.4(1) of the City of Ames Municipal Code; relevant sections are shown as follows:

(3) Insurance. An insurance certificate naming the City of Ames, its officers, and employees as an additional insured with comprehensive general liability limits in the amount of $500,000 combined single limit shall be in full force and effect during the life of any temporary obstruction permit.  The coverage shall be at least as broad as the ISO Form Number CG0001 covering commercial general liability written on an occurrence basis only.  A waiver of this requirement may be granted by the City Manager for Sections 22.4(1) and (2). A copy of the current insurance certificate shall be maintained on file with the City Clerk.

(a) Waivers of the insurance requirement shall be based on the following criteria:

(1) Type of obstruction (2) Nature of the event requiring an obstruction (3) Anticipated volume of traffic and whether street closings will be required (4) Whether the event is for a commercial or private purpose (5) The zoning of the area in which the obstruction will occur. Areas with commercial and high density residential zoning will [likely] require insurance [1]

I then explained to Deputy Petersen that persons performing First Amendment activity ought be exempt from the permitting process and from the commercial insurance requirement, and that such activity should be explicitly exempted within the ordinance.  So I asked her, "How do I get the ordinance changed?"

Deputy Petersen responded, "If you want to get the ordinance changed, you'll need to write a letter to the Mayor and City Council by Aug. 22."  She went on to explain that at the Aug. 28 City Council meeting, the letter would then be addressed. 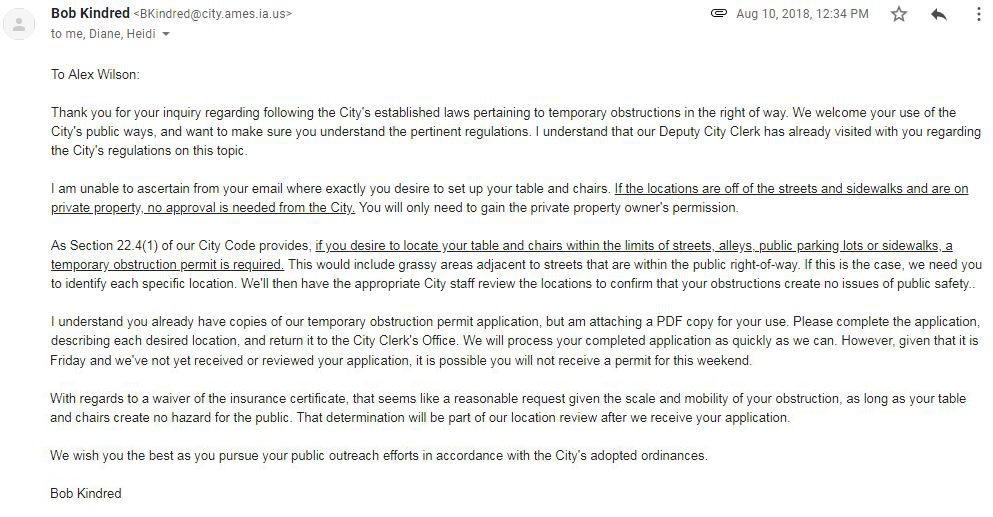 City Manager confirms TOP was not misapplied, forwards me to City Attorney

Thursday, Aug. 16 - Following  additional brief correspondence wherein Mr. Kindred reiterated the city's position regarding the requirement to obtain a Temporary Obstruction Permit, I sent the following letter to City Manager Steve Schainker to find out if he agreed with the manner in which Deputy Petersen and Mr. Kindred were applying the ordinance: 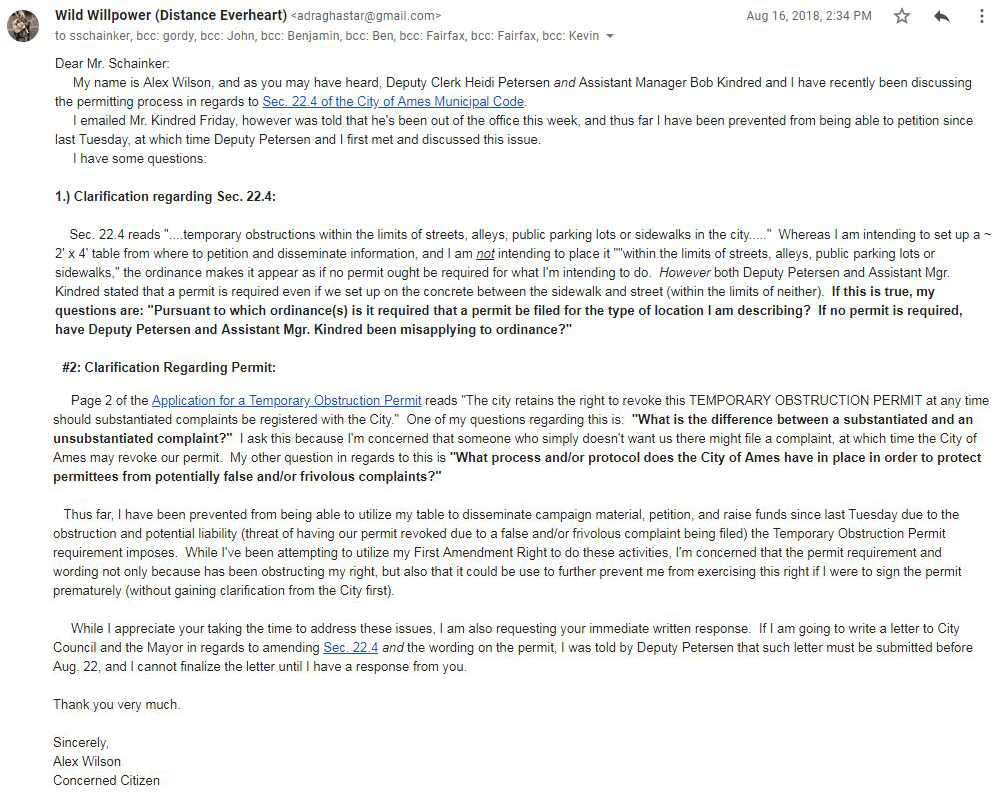 Thursday, Aug. 16 @ 5:59 p.m. - After unexpectedly receiving another letter from Assistant Manager Mr. Bob Kindred (I was told he had been out of the office for the week), I sent the following updated version of the previous letter to Mr. Kindred, City Manager Mr. Steve Schainker and to the City Clerk's office in order get everyone on the same page and find out whether or not other city staff members all agreed that Sec. 22.4 of the Ames city ordinance should be applied to activities protected by the First Amendment: 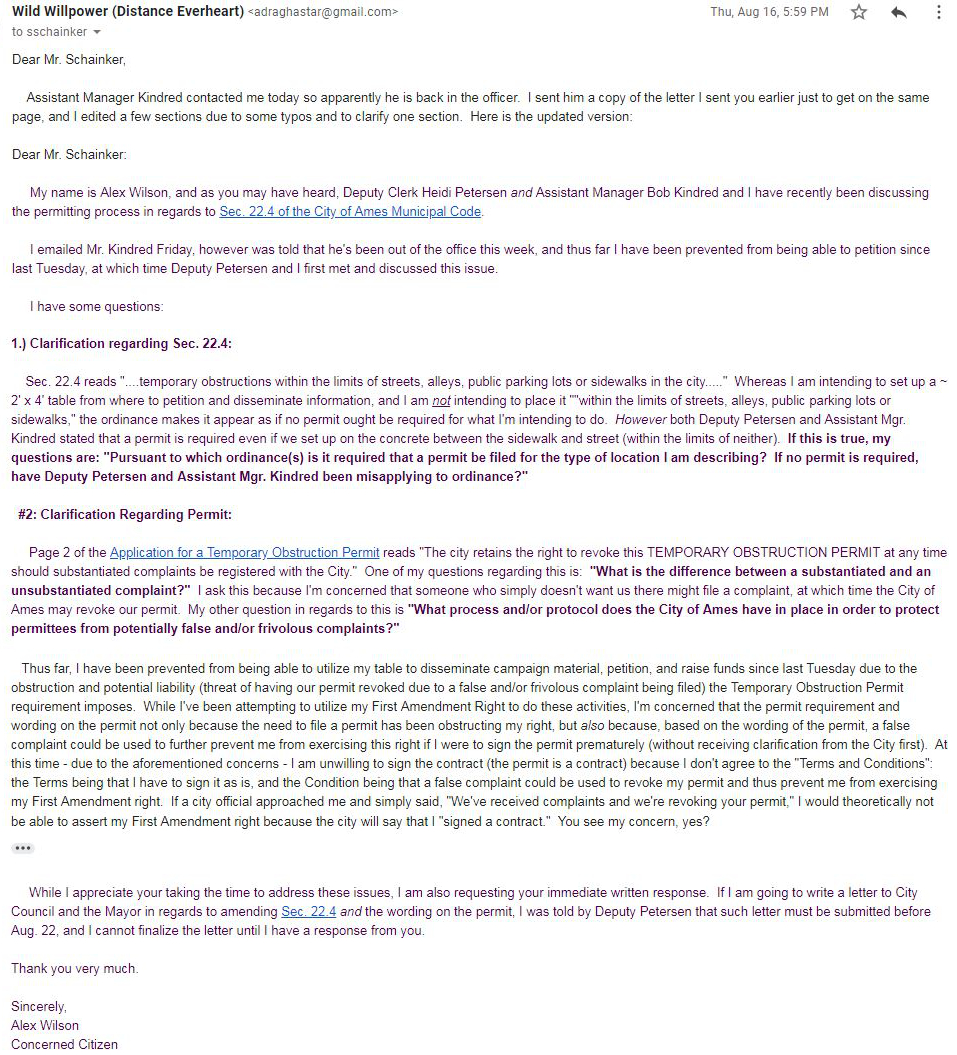 Monday Aug. 20 - After City Manager Mr. Schainker responded to my letter, and informed me that he forwarded my letter to City Attorney Mr. Mark Lambert,  I  received the following letter from Mr. Lambert, whose opinion concurred with other city officials: 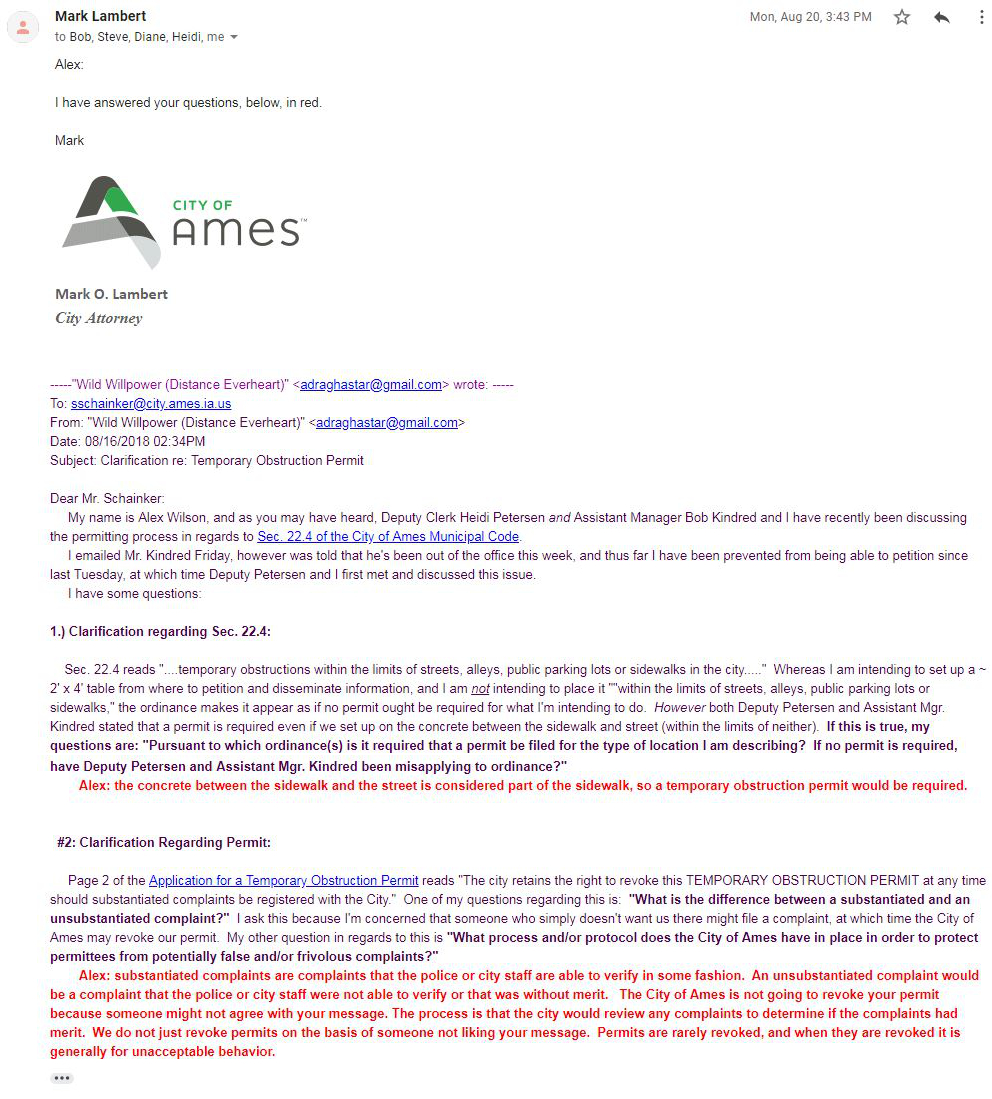 I sent a "Motion to Amend" the ordinance to City Council:

Wednesday, Aug. 22 - Responding to direction provided by Deputy Clerk Heidi Petersen's on Aug. 6, I sent a MOTION TO AMEND CITY OF AMES MUNICIPAL CODE SEC. 22.4 to the City Manager's Office wherein I cited Hague v. Congress of Industrial Organizations (1939).  I pointed out that I required a table in order to properly convey the information, and that preventing me from using a table was a violation of her First Amendment right. I requested that the City Council amends the ordinance. Read the motion:

Upon filing the motion, I was told by the secretary, Amy, that if City Council decided to address her letter, she would hear from the city prior to their meeting on Aug. 28.

City Council votes to not address my motion

Wednesday, Aug. 29 ~ 11:30 a.m. - After not hearing from the city as expected, I visited the City Clerk's Office to request a meeting with Mayor John Halia: to find out what happened with regards to the letter I sent.  Although City Clerk Diane Voss informed me that Mayor Halia was not available to meet at the time, M(r)s. Voss did inform me that City Council did address my motion.  On Aug. 28 the council voted unanimously to "not forward the motion to staff,"  and therefore the city not to address my motion.  Feeling disappointed in having her concern ignored, I requested a copy of the minutes from the meeting:

Shortly after City Attorney Mark Lambert came into the office and informed Ms. Wilson again that a Temporary Obstruction Permit would need to be approved prior to setting up a table anywhere within the city limits.        I asserted again that she should not need to file a permit in order to perform First Amendment activity.       Mr. Lambert explained that the permit is required for the table - not for the activity.       Ms. Wilson reiterated that she requires the table for the activity and that the table is being used to convey information and that tables are typically used for petitioning, as explained in her previous letter.  Ms. Wilson reiterated that she requires the table in order to lay the books and petitions and information on, and that no permit should be required, as explained in her previous letter.  Ms. Wilson also reiterated her concern that the ordinance requires purchase of commercial insurance, and that it is unfair in this circumstance.      Ms. Wilson requested Mr. Lambert write a written response to the letter she filed on Aug. 22, which addresses the content in the letter, and Mr. Lambert stated that he would send her a response soon.

Requested City Atty. to urge the city to address my concern:

Wednesday, Aug. 29 1:51 p.m. - I sent the following letter to City Attorney Mark Lambert, requesting that he consider "as an alternative to a line-by-line refutation of my previous letter... instead write a recommendation letter to City Council and Mayor [advising] that they address my previous motion and amend the ordinance:":

Wednesday, Aug. 29 3:42 p.m. – Ms. Wilson sent the following letter to City Council Member Amber Corrieri, inquiring what her motion to not refer Ms. Wilson’s letter to staff meant, and to determine why M(r)s. Corrieri made the motion:

City Council Member Amber Corrieri‘s did not, however, address the issues raised by Ms. Wilson in her Aug. 22 letter.

The letter, in summary, explains that the city “is not requiring a permit for performance of First Amendment activity,” but that the Temporary Obstruction Permit is required only for setting up the table.  Mr. Lambert’s letter did not address the fact that Ms. Wilson had asserted several times, verbally and in writing, that the table is being used specifically to help convey campaign materials, and that it is needed for that purpose.

Sunday, Sept. 2 – After Ms. Wilson called District Representative Rob Bacon  to request his help in this matter, he recommended she first contact Council Member Tim Gartin because he was a “Constitutional lawyer.”  Therefore, on Sept. 2, Ms. Wilson wrote the following letter to Mr. Gartin per Representative Bacon’s direction:

Monday, Sept. 3 – Council Member Tom Gartin responded to Ms. Wilson with the following letter, which reiterates that the permit is “not for the First Amendment speech,” but rather it is required for the table.  Here is his full letter: 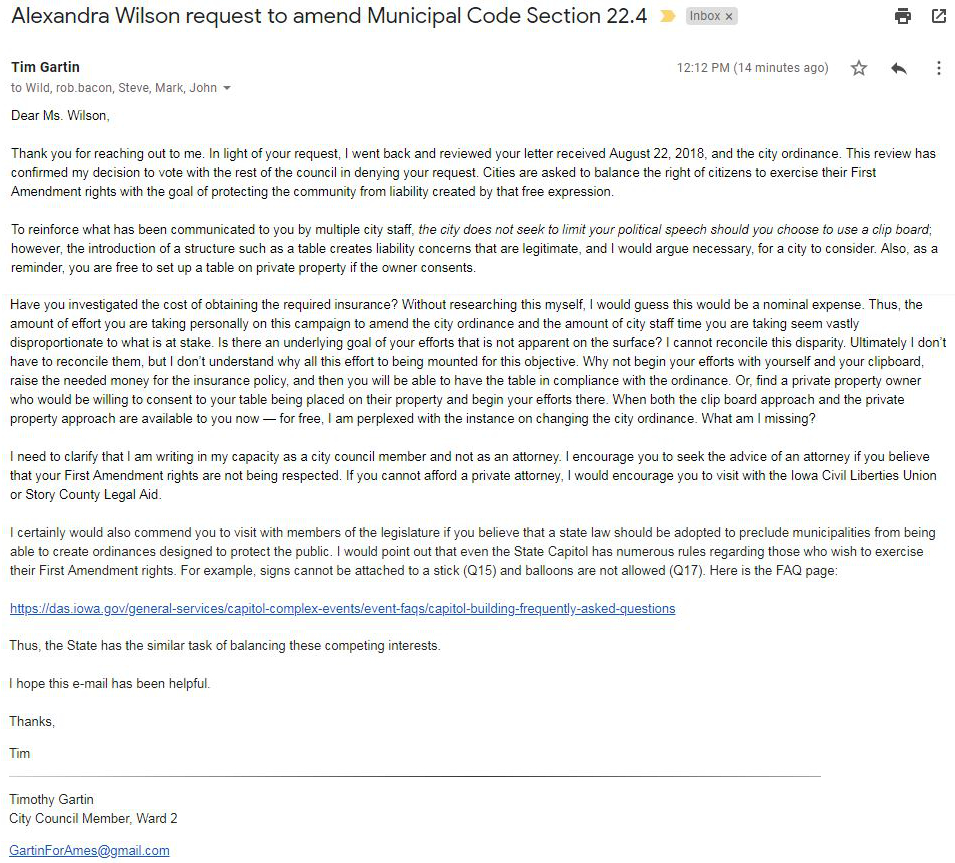 I was honored and elated a month ago after being contacted by some ISU students requesting to do a documentary on the national plan I wrote for our organization (Wild Willpower). Although I have loads of work piled on my desk currently, that is the project I’m most excited about.

But there’s a problem. While visiting here last year (I grew up and graduated in Nevada, IA), I approached the Ames City Manager’s office to let them know I intended to set up a table outside the library to collect petition signatures and disseminate campaign materials. Although this type of activity is clearly protected under the “right of the people to peaceably to assemble and petition the government…” section of the First Amendment, to my surprise I was informed that pursuant to